for anyone who has been creating custom DDRs, this is old hat.  for me, I just wanted to prove that it could be done in powershell.  apparently no one has tried -- or at least web searching has led me to believe it.  :)

in sccm 2007, the command to send the DDR to the site server was removed in the sccm sdk redistributable dlls.  this isn't a tragedy.  it simply means you have to copy the DDR to the <site server>\sms_xyz\inboxes\ddm.box folder yourself.  I didn't include that bit in the script since this is just for fun.  anyway, once the DDR is processed, this is what you would see: 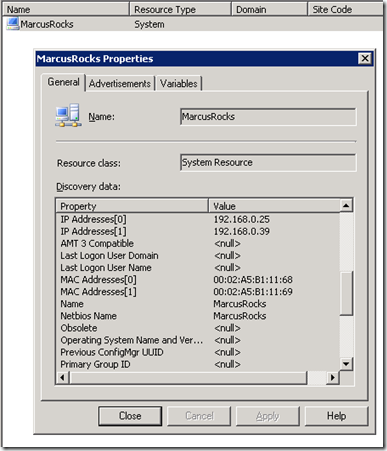 go discover the world -- or at least your macs and linux machines?  :)  and you know what I'm thinking?  yeah, that's right.  get this into opalis.  that'll be my next post.

other useful information I learned

to start off on this adventure, I began navigating the sample script provided for creating a DDR [1].  the first thing I did was try to execute the command above.  it just spit out this stuff:

it took me longer than I will ever admit that I did not have the necessary sccm sdk.  after installing it, I tried again and got the same result.  it took me longer than the part I will never admit that I had to register the dll.  so to reiterate -- download the sdk, then register the dll.  after installing the sdk, register smsrsgenctl.dll.  it's in this path: <Program Files>\Microsoft System Center Configuration Manager 2007 SDK\Redistributables.

the second hurdle is how do you know which com object to use during the creation of the new object?  well, other than the fact that they spell it out for you in the sample script --

-- there really is nothing that stands out.  powershell provides some conventions on getting this stuff out, but in actuality, it's nothing more than sifting through the registered classes in the registry.  I found something on from tobias weltner [2] that made this way easy.  it's a real gem you may want to hang on to:

executing this command brings back a set of results like the following...

and there we find the com object we were looking for.  now honestly, I'd have been goofing around for awhile trying to figure out which in the list matched.  it was helpful though for knowing that I had the dll registered properly!

moving on, now that you have the object, you can bring out the methods.

as you can see, you now have methods available that are described in the sdk!  awesome.